The Glovo CFO shares his experience building a successful finance function while managing an expansion in new markets & how his banking experience helped him face the pandemic challenges.

What does it take to expand a three-sided platform across Europe, Africa, Central Asia, and Latin America, and an expansion to more than 1,000 cities?

Eduard Ros (Edu) would know as he has done it for Glovo, the fast-growing delivery platform that became the second unicorn to come out of Spain. Edu joined Glovo as CFO in 2017 and has been part of its success and expansion to 23 countries. Like many other delivery platforms, the complexities of Glovo’s business model mean dealing not only with customers and suppliers, but also the side of the delivery people, which is often entangled in legal and political issues.

Nonetheless, Edu has helped steer Glovo in the right direction, all the way to its recent big news. In December 2021, it was announced that Glovo was being acquired by German-delivery giant Delivery Hero, making it one of the first big exits of a successful Spanish startup.

What the future holds for Edu is still to be seen. But from his time at Glovo, and previous roles at Deutsche Bank and co-founding his own company, Nutrino Health, there is a lot to takeaway in developing and growing a successful finance function.

In this interview, Edu shares how his previous experience in banking helped prepare him for his role as CFO of a fast-growing business, how the finance team was impacted by the challenges of the pandemic, and his key learnings throughout the whole process of building the team from the ground up.

How have you sustained the finance team's strategic role and maintained their impact as business partners to other teams within the company?

A lot of things have changed since I joined Glovo in the summer of 2017, the Finance department didn’t even exist. In the sense that a few people were doing things but it didn’t have any structure. So, when they hired me, I had to face two main challenges.

The first one, to start building the Finance department, which was important in the fast environment. And the second one was the expansion. Only a few months after I joined, the company was already launching in the first Latin American markets. Which was a real challenge because I had to juggle the two at the same time.

One of the key elements for the success of this was giving enough room to the local teams to have autonomy in how they were going to handle the landing. It was impossible for us from headquarters to monitor how they were operating while we were starting to implement processes. So what we did was hire a small finance team where the finance manager could operate and handle everything autonomously to make their lives easier.

And since then, in the last four years, we have grown a lot here in the headquarters with nearly 8000 people and several new departments. From FP&A, to control where the money is going and how fast we are burning the cash, to Systems, responsible for the tech stack.

“We execute fast, and we know that we might also fail. Sometimes things are not going to be perfect, but being able to have that first-mover advantage is very important in the industry where we are”

Coming from banking and private, what skills and experiences have helped you succeed as CFO at a company like Glovo?

Let's say more finance, brick and mortar stuff. I think that the one that is most relevant for me, and what helped me the most, was having experience building and analyzing several business plans. It was good for the budgeting and planning process.

This is something that is quite relevant when the business is evolving and you need to keep pace. We have countries today with different business units inside them. So, managing the complexity of all of these allocations of money and being fast on modeling, was easier thanks to my background in banking. In essence, being surrounded by people that model fast and help me to keep on adapting to a business plan that changes almost on a quarterly basis.

The other thing I would say my experience helped me with is the fundraising side, think talking to investors, analyzing valuation, due diligence process, all of this. It was easier for me to adapt to this role because that's what I was doing in banking, but I also was leading a lot in those processes. I just needed to learn more about the day-to-day processes.

And what has been super important for me is to hire relevant and experienced people that can help grow the business. It seems obvious, but being surrounded by talented people, and being very rigid on the talent that you want to be close to you, it's super important. Sometimes we have this urgency of hiring as fast as possible, but it's better to wait one or two months to find the right candidate.

Covid had a positive effect on Glovo. You saw a rapid growth in different markets you're situated in. From a financial planning and forecasting perspective, how did your team adapt to this rapid change? What were the biggest challenges you had to face?

We've been benefited from Covid, obviously from a financial and commercial point of view. We've seen an acceleration that we didn't see before. However, there were two phases. The first one, during the first month of Covid, the FP&A or budgeting process was very difficult because we didn’t know if delivery was going to be allowed in the markets or not. The regulations in some markets we were in didn’t allow restaurants to open.

Then, the second phase came in April. Some restaurants started opening but there was a setback because most of them were not using delivery platforms. They couldn't prepare well for the uptick in orders that month. Then, in May, once everyone adapted to the new normal, we had one of the highest months that we had seen until that moment in Glovo.

And this had a great impact on the team. We had to report to the board of directors to show them our quarterly projections, but obviously, we were not able to meet them. So we moved to weekly and monthly projections, instead of working on quarterly plans. This time was really fun and exciting but also tough, because there were some things out of our control, like local regulations.

So, to adapt the best way we could, we prepared a budget with different scenarios: the aggressive scenario, the base one, and the conservative one. But we were lucky because our industry recovered really fast. And now we’re moving back to quarterly projections with things going back to normal.

Has there been any change that you made on those weeks that you will say it will stay? Was there any change on any process or anything that you think was for better and it will stay now as things hopefully go back to normal?

We implemented a process where we started to look at every cost line in our P&L and see where we could save money, especially on the G&A, general administrative expenses. And that is still with us today, analyzing on a monthly to monthly basis, even on a quarterly basis, what we're using, not using, and being stricter on the expenses.

From that moment we learned to cut things and now we are a bit more rigid in that sense. Also, our teams are much more agile forecasting and projections, with a higher level of flexibility.

Unfortunately, we also had some team reductions, we did some ERTEs that, thankfully, didn't last long. Which was also a tough situation. But I think we understood at that moment that with fast growth, there are inefficiencies. Now, going back to normal we have this discipline of being honest to say what we're doing well or not.

As a three-sided platform operating in multiple markets and managing clients, customers, and writers lists, it means that data complexity is increasing day to day. What did you wish you knew when you first started or what process did you wish you put in place earlier to be able to manage this complexity?

Creating a Systems and Data team much earlier than I did when I came into Glovo. We started using an ERP, but the problem was that we didn’t have a system created by people that understand how infrastructure should work. So, there were a lot of things that we did not do properly.

We had a system that was not able to cope with all the needs that we were having and also flexible enough to adjust to the new realities of our business. That was a big issue. Data has been historically an issue and we were always relying on a central data team. Today we have a dedicated systems team that I wish I would have decided to implement earlier. Today we need to fix a lot of things that in the past we couldn't.

However, you always have budget constraints. When deciding the hiring needs for Finance, the best decision would be to hire an engineer, someone to keep the ERP and data connected. This would allow me to be more efficient on the Courier side. But we tend to go for the business side and think that Finance will manage just fine with a consultant. I wish I would have hired a team that was able to understand infrastructure.

If I was coming back to 2017 or moving to another company at a similar stage, I would think very carefully about finance infrastructure, what tools we’re using, and develop them properly. I think I would have saved money and time for the company.

As we learned from Edu, finance teams have to adapt to extreme situations and react quickly if they want to help the business succeed. With the right systems, a proper budgeting process, and talented people to add value, any scaling company can follow the steps of Glovo.

Abacum empowers finance teams to become truly strategic partners in the organization by reducing time-to-insight with powerful automation and seamless collaboration. Request a live demo now to see the product and start your own journey.

AHA! Finance is Abacum’s interview series where we speak to finance thought leaders on all topics finance. Want to be interviewed or have an interesting topic in mind? Send us a suggestion at hello@abacum.io.

Check out more of our interviews

More insightful chats with the finance gurus of the world 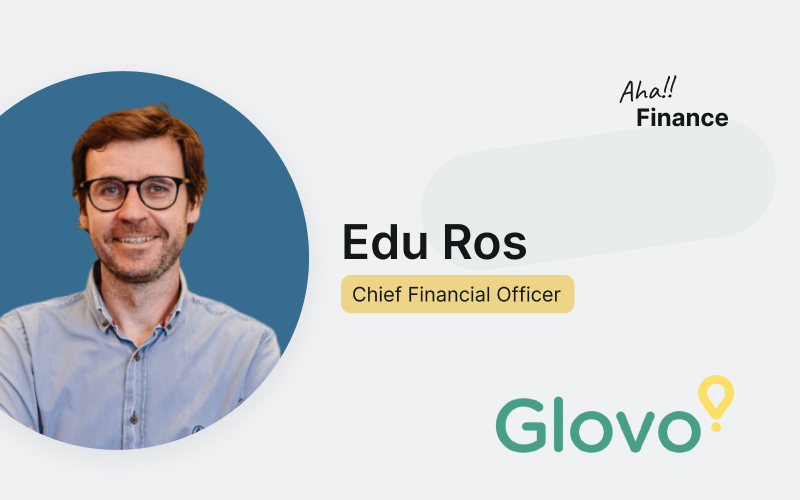 The Glovo CFO shares his experience building a successful finance function while managing an expansion in new markets & how his banking experience helped him face the pandemic challenges. 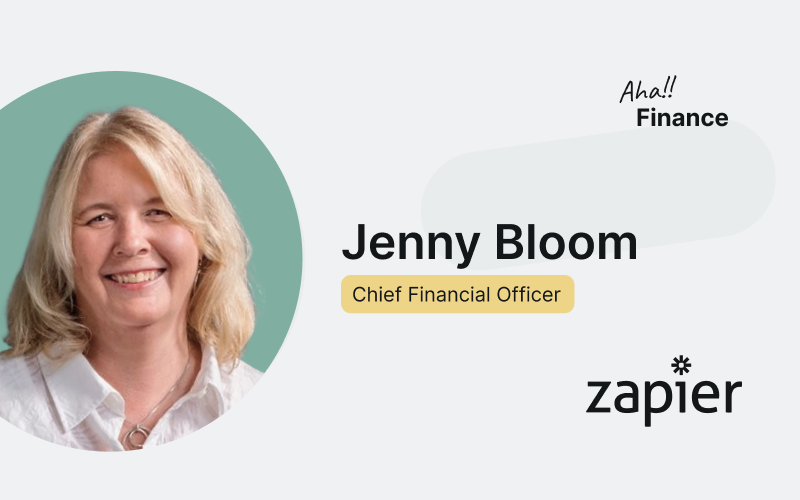 Jenny Bloom on... Finance Automation and the Culture of Remote Work

The ex-Zapier CFO offers her advice to help finance teams succeed. Through automation, cultivating company culture and proper planning, finance can move away from being just a cost center. 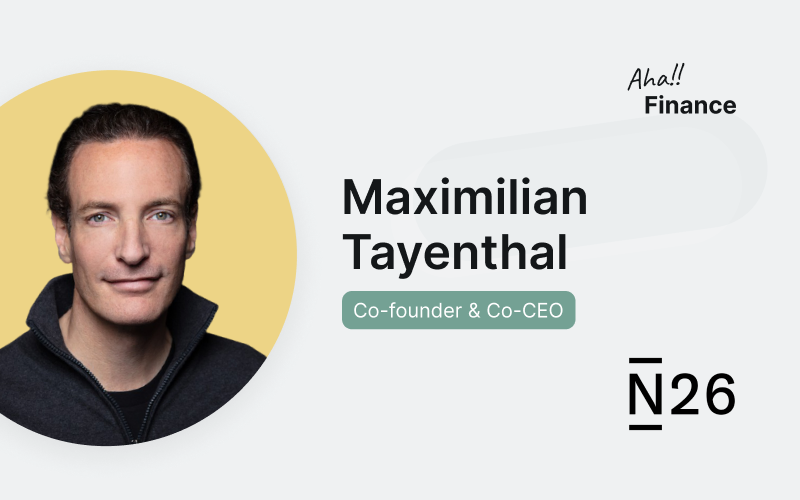 The N26 co-founder & co-CEO shares his insights on technology's role to drive finance agility in the world's first mobile bank & how strategic finance is the base for successful hypergrowth.